A previous post mentioned that by using TesselManiac! it is possible to get reasonable standing bird tessellations with 17 of the 28 Heesch types. In addition, some of the types allow more than one final product. For example, below is a simple tessellation of a quadrilateral using a TGTG type, with the top of the bird on a G side. 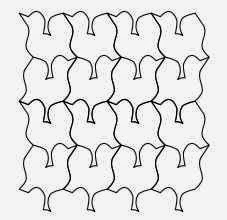 If we do the top of the bird on the T side, we get a different design and arrangement. It is still a TGTG type because the Heesch identification always begins with a T if there is a T side. (If there is no T side, it will begin with a C if there is a C side. The other sides follow in clockwise order.) 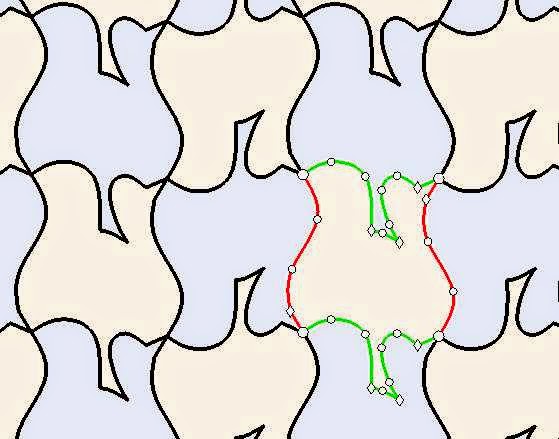 The CG1CG2G1G2 pattern in the previous post made the G2 sides small. Below is a design from the type with the C sides made very small. You can see them in the beaks and in the small part of the tails that overlap 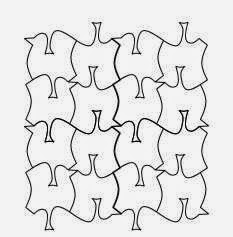 Another variant that looked promising was taking the hexagonal TG1G2TG2G1 type and drop the legs on one of the G edges rather than on the T edge. My limited playing with it was disappointing and not worth developing. 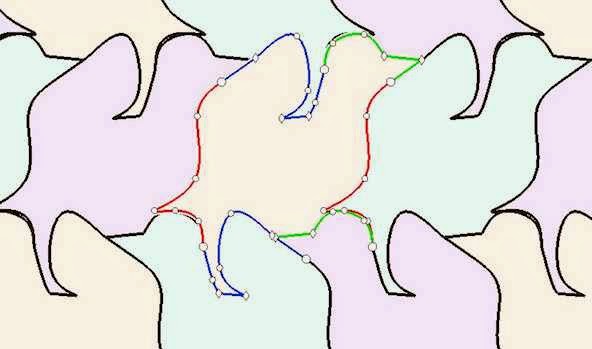 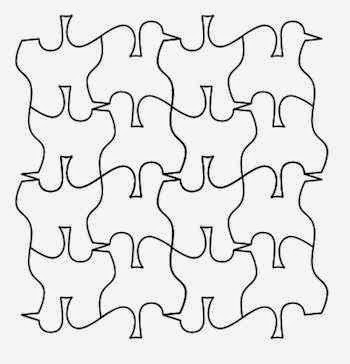 Sometimes the end result hides the TesselManiac! starting point. The pattern below looks like TGTG. However, it was created using a hexagonal TG1G2TG2G1 type. The lines were manipulated so that one of the G pairs was eliminated. 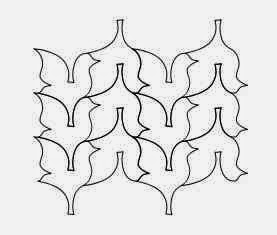 The stork pattern below appears to be a TG1G2TG2G1 type, but it was constructed using a TGTG type in TesselMania. (It was done in 2012.) 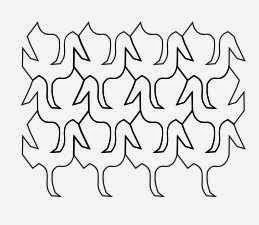 In the original posts about these tessellations (which this and another post replaced) I did not pay enough attention to that possibility that the starting point in Tesselmaniac might not identify the final result. I originally used the design below as an illustration of TGTG, but it touches six adjacent birds, so it is more correctly labeled a type TG1G2TG2G1. 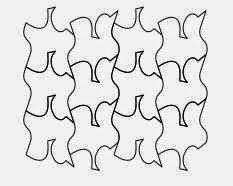 Also a CG1CG2G1G2 type is the example originally presented as G1G2G1 and built from that starting point in TesselManiac!.

The example I gave originally for a pentagonal CG1G2G1G2 type was constructed in TesselManiac! from that type, but I overlapped lines on the bills to get what is actually a CG1CG2G1G2 type. 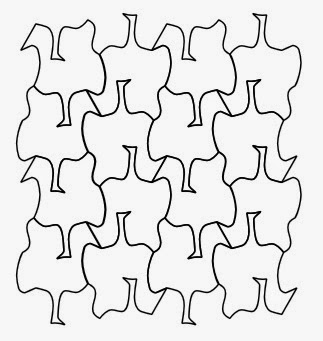 I have learned a lot about Heesch types from this exercise and am beginning to get comfortable with the terminology. I corrected a lot of mistakes in these revisions of the original posts and hopefully have not left or introduced any major ones.

Posted by Dessert Survivor at 3:55 AM No comments:

In my a previous post I mentioned that I had updated  A Tessellating Coloring Book with about 25 new designs and that I would do a follow-up post on bird tessellations.

(People doing tessellations use a terminology named after German mathematician Herman Heersch. A T or translation moves one side to the opposite side. A G or glide moves a side to the opposite side with a flip or to an adjacent side with a flip and a rotation. A C or center point rotation has one half of a side rotated to form the other half. There are also corner rotations of 60, 90, and 120 degrees. One place that this terminology is explained with examples is here.)

Using TesselManiac! I found some other ways to tessellate a standing bird. Below is one based on a hexagon using a type TTTTTT tessellation. Each of the six sides of the hexagon is repeated on the opposite side: top to bottom, etc.

Below is a type TGTG tessellation. The left is repeated on the right, but the top is flipped and shifted to the bottom.

The above patterns appear in A Tessellating Coloring Book. However, once started, I wondered how many other Heersch types could be made to work with a similar standing chicken/duck tessellation (bird standing on the back of a bird). 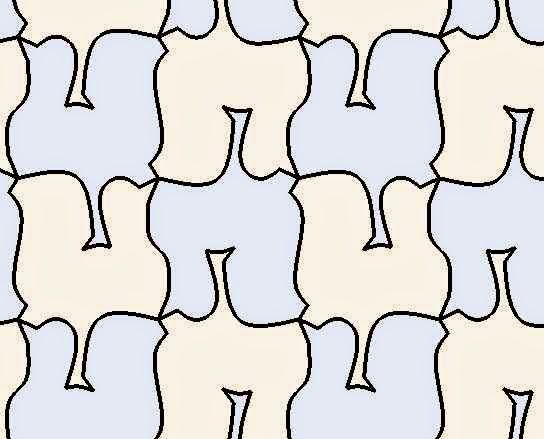 Another pattern I found that worked used a G1G2G1G2 transformation. The top is flipped horizontally to form the bottom and the right side is flipped vertically to form the left side. (The sides look like they could be C sides, but if they were, the birds would be head-to-head and tail-to-tail.) 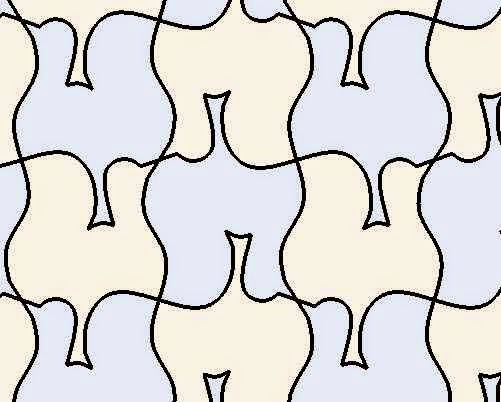 Here is a TCTC type on a quadrilateral. 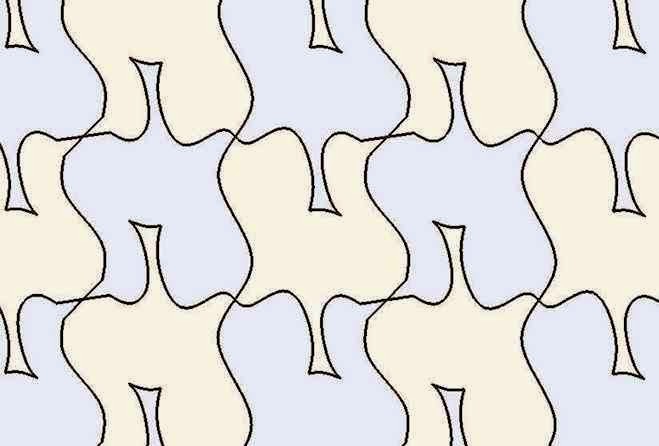 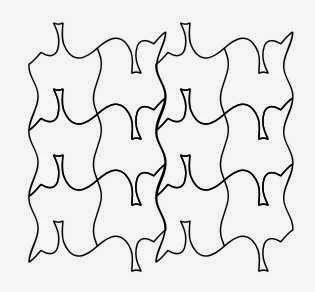 Type TCTGG, another pentagon type, is one of the patterns that lines up four different positions of the shape in a row rather than in a box. 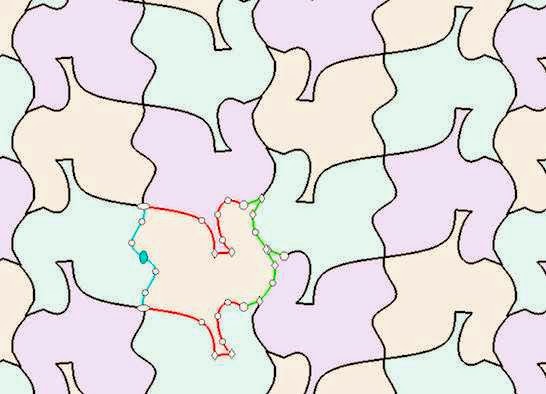 A third pentagon type, a CG1G2G1G2, will work better for mazes than the two above. The C part is in the tail. 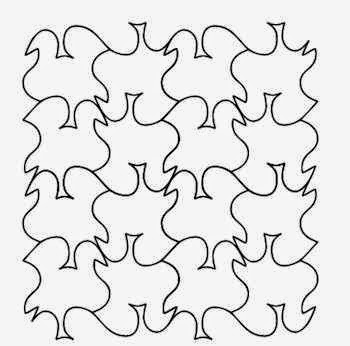 Below are four more based on hexagons. The first of type CG1CG2G1G2 with very short G2 pairs. 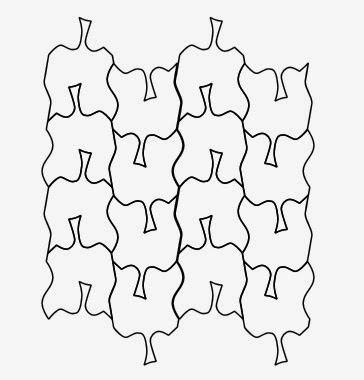 It took a some time and effort to get something decent from the TG1G1TG2G2 type. 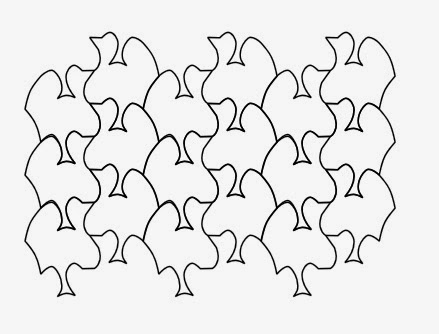 A type TCCTGG has four different positions of the birds in a row. 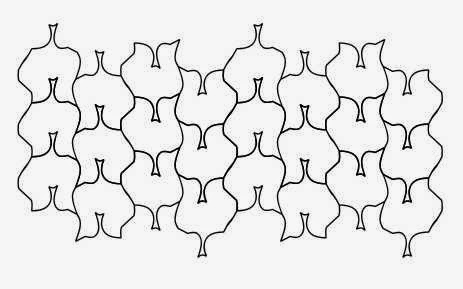 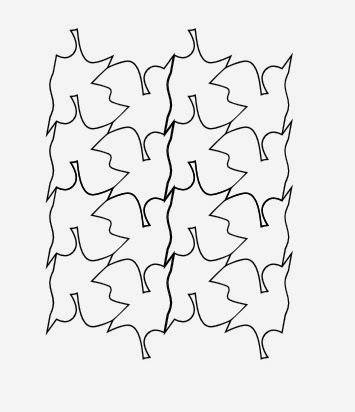 Finally, it is even possible to get standing birds with a triangle CGG tessellation. 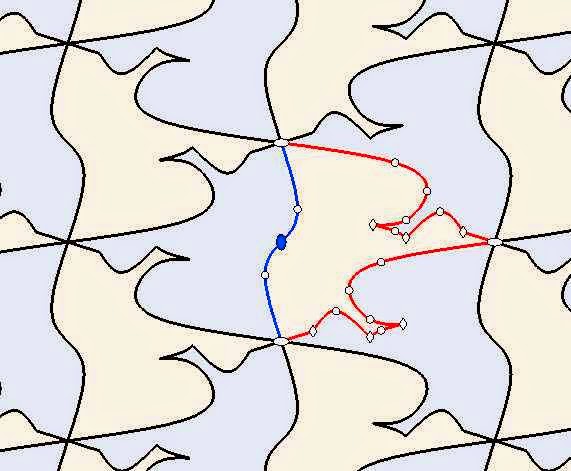 A similar shape will tessellate for a quadrilateral CCGG 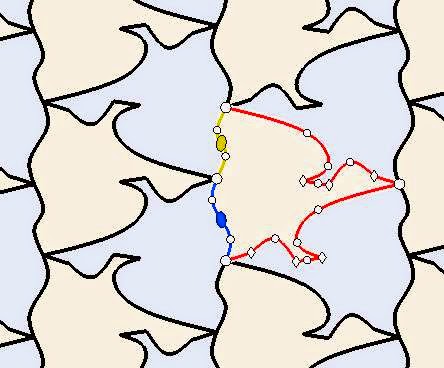 and also for a quadrilateral G1G1G2G2. 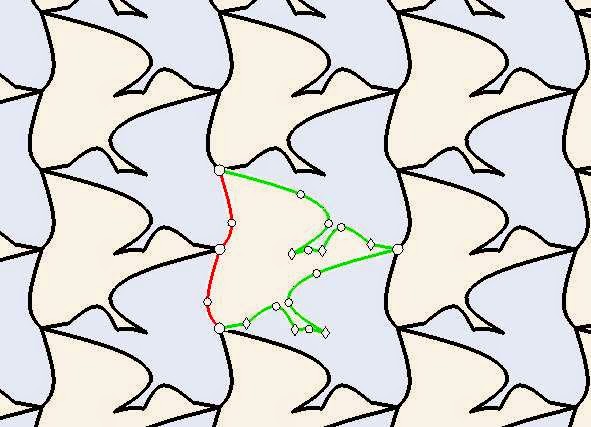 There are 28 Heersh types and at least 17 will produce recognizable birds standing on the backs of other birds: seven of the quadrilaterals, three of the pentagons, and six of the hexagons, and one of the triangles. When I began this exploration, I did not expect to get that many. All eleven Heesch types not included above are composed solely of various types of rotations, either center point rotations or corner rotations of 60 degrees, 90 degrees, or 120 degrees.

Some of the Heesch types above can be yield additional ways of tessellating a standing bird and often when using TesselManiac! the end result is not the Heesch type that the template says it is. Those are topics for another post.

While working on Holiday Mazes, I discovered that functionality of TesselMania had gotten new life in the form of a new program, TesselManiac!. TesselMania no longer worked well with new operating systems--even with Windows XP one had to adjust the screen to 256 colors to make it work. Playing with TesselManiac! I developed several designs that I used to update The Big Book of Princess Mazes, but I had lots of material left over. Because I have not thought of another theme that would work well for a maze book, the obvious place to use some of these designs was in A Tessellating Coloring Book.

The new and improved A Tessellating Coloring Book replaced about a quarter of the original designs with new ones. I added a some bugs. 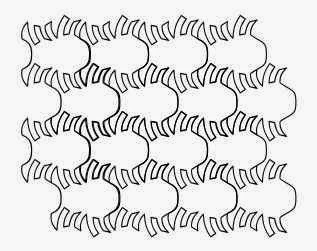 A second one resembles a pattern of spiders, though the two middle legs are joined. 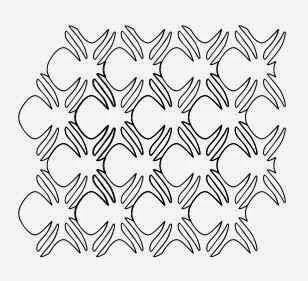 Birds seem to keep coming up when I play with Tesselmanic. 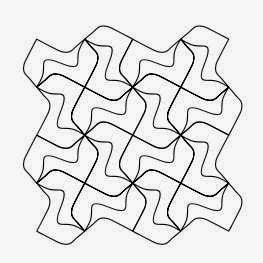 I will do a post later that explores more bird tessellations.

A Tessellating Coloring Book can serve as a coloring book for a child or a source of ideas for tessellation projects. It is available on Amazon and CreateSpace. (Also available is a coloring book that is devoted to tessellations of the letters of the alphabet, A Tessellating Alphabet Coloring Book.)
Posted by Dessert Survivor at 2:46 PM No comments: