It has been almost three years since I released Mazes Escher Would Like and after that book I did not expect to do another. There are so many maze books available that it is difficult to be seen. Also, the software I use is old and no longer runs on currently-available computers. And yet for some reason that I do not fully understand, in April of 2021 I decided to do one more.

As I was sorthing through old documents on my computer, I stumbled on an old story I had written.  I thought was funny and decided to illustrate it with mazes. Most of the mazes I used were old designs, but I did develop over twenty new maze designs for this book. 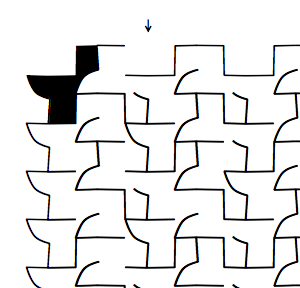 Yes, I tessellated toilets and made a maze from the pattern. Below is another tessellation pattern I used. 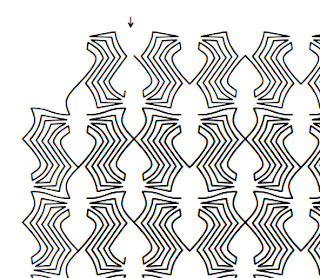 The above maze would be trivial if displayed in a friendly typeface but it is one of the most difficult mazes in the book because it is so hard to follow the little passages that connect. It also posed a challenge for the way I construct mazes because the basic pattern is a grid of diamonds, so everything connects diagonally. 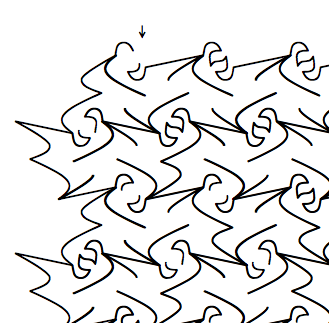 The shape used above was also a challenge for my maze construction set. The basic shape is triangular, with one orientation adjacent to two above and the other with two below. I treated it as a maze of triangles and used two typefaces to render it.
Not everything is tessellation based. I used foot prints to form the walls of a maze that allows passages up and down, right and left, and diagonally. 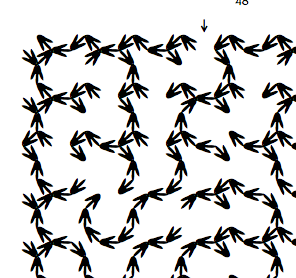 The book is Grandpa's Amazing Tale: A Book of Mazes. It uses mazes to illustrate a silly story told by a grandparent to a granddaughter and involves time travel and dinosaurs, so it is both a story book and a puzzle book. It is intended for children in early elementary school.
It is published through Amazons's Kindle Direct Publishing and is available in paperback only at Amazon.
Posted by Dessert Survivor at 1:30 PM No comments:

In August I took a break for updating and creating alphabetic fonts to play with Tesselmanic! in an effort to create another tessellation font. With a lot of trial and error (mostly error), I was able to come up with over 40 designs that would fit into a typeface. I could not think of a clever name so settled for TessieSomeMore, indicating that it was a continuation of the Tessie series of fonts.

As I played with the various templates in Tesselmaniac!, I found that sometimes I would create something quite similar to what I had done in the past. One example is shape that resembles a butterfly. Below is the most recent version. 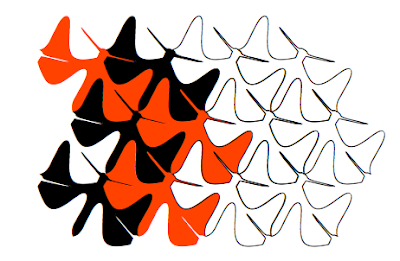 Looking through past efforts, I found something quite similar in TessieBugs. I kept the new version because it is so easily recognizable as an insect. 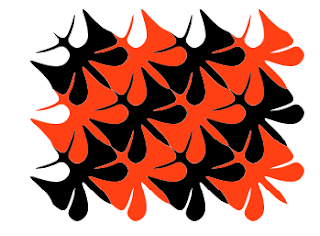 I noticed that if I added a straight segment where the wings touch, I could convert a tessellation that is IH68 to one that has six adjacent tiles and is type IH14. 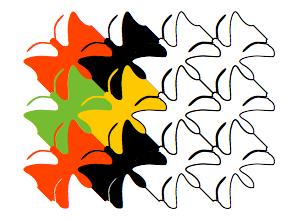 Another insect design that resembles a past effort is this mite. 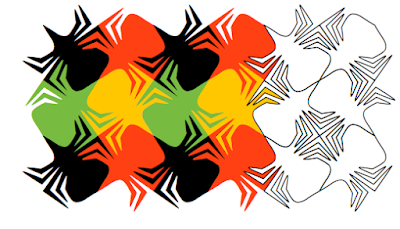 However, the old mite had six legs, so the new one is substantially different. 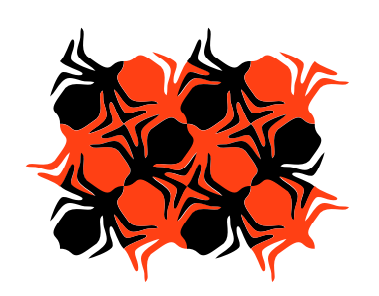 There are certain shapes that many people will stumble on if they play with tessellations enough.

Creating Escher-like pattern with the isohedral classification IH74 is challenging because there are not a lot of real-world objects that mirror both horizontally and vertically. Below is a stylized moth that fits the classification. 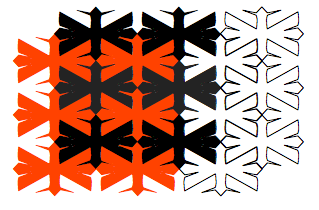 Again, the addition of a straight line where the wings touch turns it into a hexagonal figure. It retains all of its symmetry and is now IH17, another classification which is very difficult to use for Escher-like tessellations. 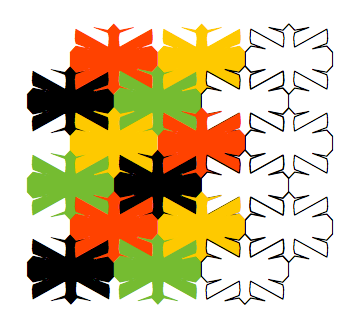 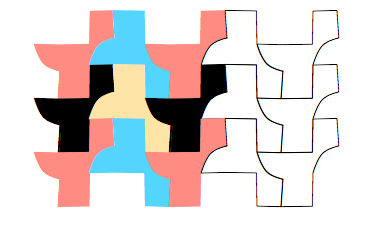 Another shape unlike any that I had previous found was one that resembles a creepy insect. 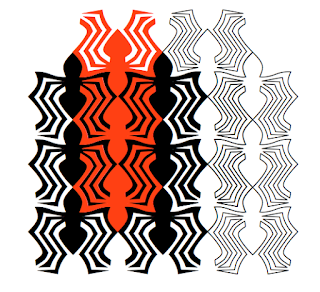 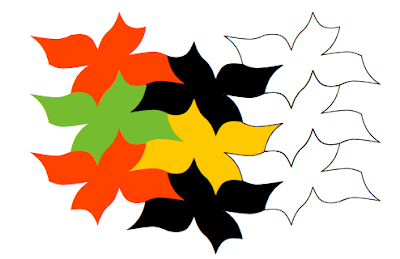 TessisSomeMore is available from myfonts. On the page linked, there is a link to a file that includes samples of all the patterns included in the typeface.
(See also this post at nohypetype.blogspot.com.)
Posted by Dessert Survivor at 4:47 AM No comments:

TessieLetters and an unusual alphabet 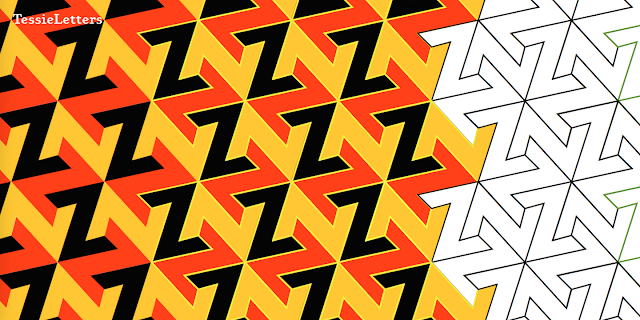 One of the seven in the series contains only shapes that can be tessellated using a single key. Somewhat surprisingly, I was able to find ways to do the complete alphabet in this way, though some of the letters require a bit of imagination. (U, T, and G are not ideal.) A breakthrough came when I figured out a way to form the letter P. The same shape works for lower-case b, d, q and letters 6 and 9. Below is a picture of the entire one-key tessellating alphabet. 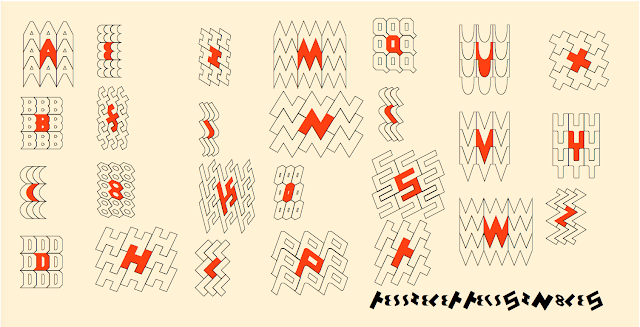 All these patterns would fit as Heesch types TTTT or TTTTTT. Many have symmetry that would allow them to fit in other Heesch types as well. Also, for several letters (such as f, h, m, n, s, and z) there are multiple shapes that work.

I am unaware of anyone else who has constructed an alphabet with this property.

In the spirit of the season:

(Cross posted at nohypetype.blogspot.com)
Posted by Dessert Survivor at 7:53 AM No comments:

The addition of two more fonts of Escher-like tessellations at myfonts.com brings the total of the new tessie series to eleven. Four are of birds, one of other animals, one of bugs,  one of puzzle pieces, and four of everything else.

One of the recent additions is TessieBugs. It contains tessellating butterflies, moths, ants, and other creepy, crawly insects. 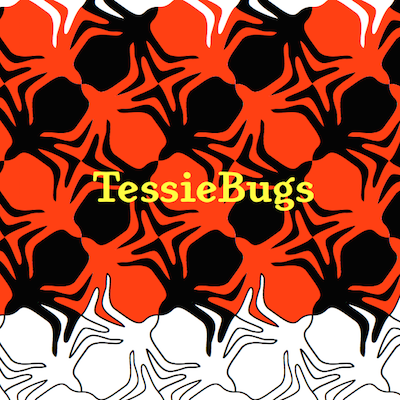 The other is TessieOddsNends, a hodgepodge of things that did not make it into any of the other ten faces. 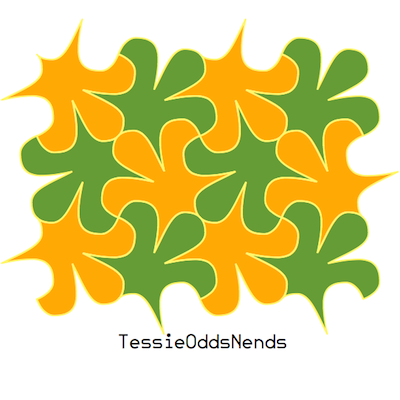 Each contains two styles, a solid style that must be colored in order to see the shapes (after all, a tessellation fills the plane with no gaps or overlaps), and an outline style that can be used alone or layered over the solid style.
Posted by Dessert Survivor at 9:16 AM No comments:

Three more tessellating typefaces have been added to Myfonts.com. Included is a fourth typeface of birds, TessieXtraBirds. When playing with TesselManiac and before it TesselMania, I have had the tendency to see bird possibilities much more readily than other shapes. 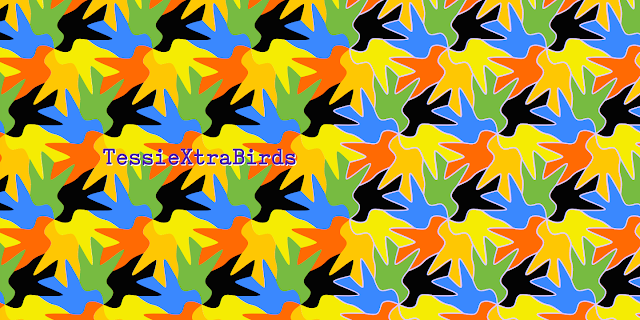 The other two typefaces have a variety of shapes and no clear theme as their names indicate. Below is a poster for TessieMoreStuff. The plane shape has four edges that are all shaped with identical center-point rotation. The poster has them in three different tiling arrangements. 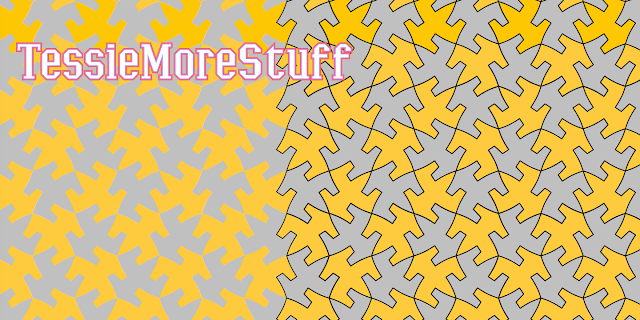 The musical notes from TessieMiscellaneous are a based on a triangle. It is a pattern unlike any that I have seen elsewhere. 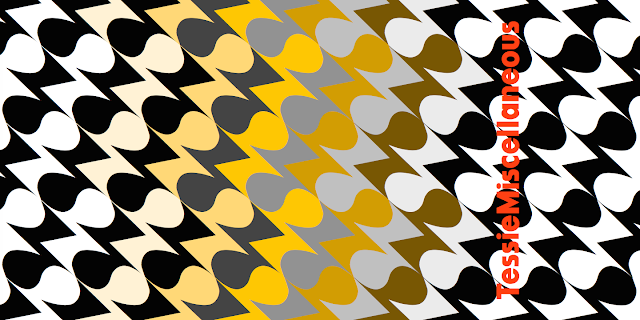 Each family contains two styles, a solid style that must be colored and an outline style that can be used alone or layered over the solid style (as shown in the two top illustrations). Each has a sample file that shows what key combination are needed to produce the various patterns that are possible.

(Cross posted at nohypetype.blogspot.com)
Posted by Dessert Survivor at 12:13 PM No comments:

Three more tessellating typefaces have been added to Myfonts.com. Included is another typeface of birds, TessieMoreBirds. Many of the bird shapes in this typeface are of swimming birds. I noticed that combining two of the swimming birds in the tiling below would result in both swimming and flying birds (shown on the right).  (The flying birds will not tessellate alone.) 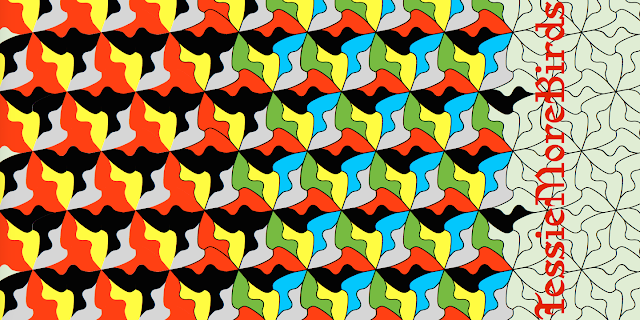 TessieSpinners has a variety of shapes that have suggest spinning or rotating. 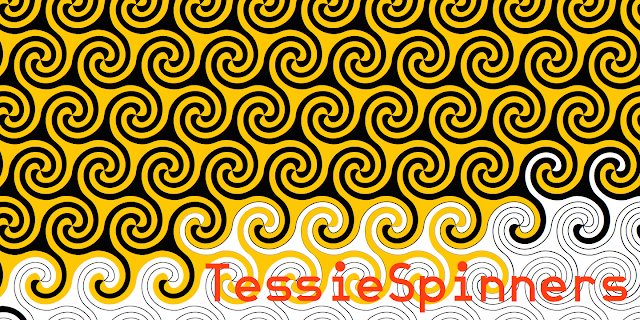 Finally, TessieAnimals has tessellating shapes that resemble fish and mammals. 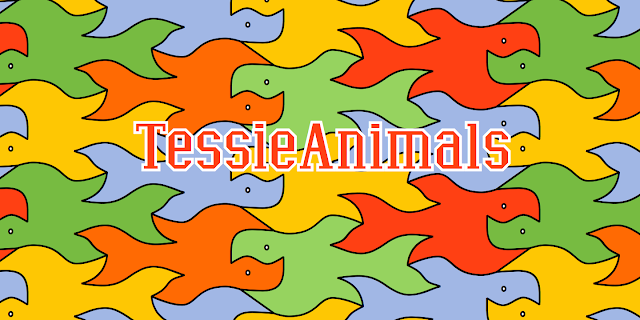 Part 1, with three other tessellating typefaces, is here.

(Cross posted to NoHypeType.blogspot.com)
Posted by Dessert Survivor at 9:40 AM No comments:

Over the past twenty years I have developed/created/found a lot of tessellations patterns as I have designed maze books, coloring books, an activity book, and a book about tessellations. A few years ago I decided to make a couple of typefaces from some of this material, but those typefaces were only outlines. This past year I again decided to try to use this material, which has since grown, in typefaces. After a dead end or two, I have mostly finished the effort and am now putting the resulting typefaces on myfonts.com. In this new effort I have both outline and solid versions of each pattern so that the user has much greater flexibility than with the first efforts. To aid the user in using the fonts, for each there is a gallery file in a pdf format that shows what characters are needed to get each tessellation pattern.

TessiePuzzlePieces contain puzzle pieces. The reason I created these shapes can be found at the link. 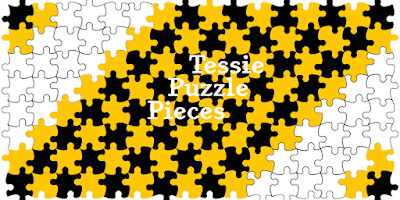 TessieStandingBirds was a result from a quest to see how many different Heesch types I could illustrate with birds standing on the backs of other birds. 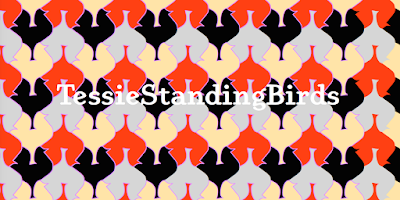 TessieFlyingBirds has a large variety of flying birds. I tried to limit the use of characters that are not readily reached from the standard keyboard, so some flying bird shapes are on other Tessie fonts that are in the process of being put on Myfonts.com. 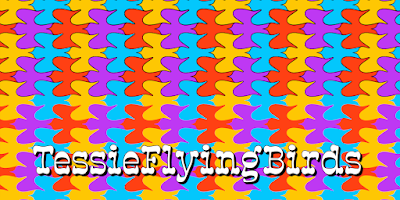 To get a tessellation pattern can require as few as one character but usually two, three, four, or six are required. The pattern above requires two characters because alternate rows are indented.

This illustration below shows three ways these fonts can be used. On the left is the solid style by itself, in the middle the solid style is overlaid with the outline style, and on the right the outline style is alone This shape is unusual because there are two ways to tile it. In the top six row of the picture, birds are flying both to the left and to the right. In the bottom four rows birds are flying only to the left. 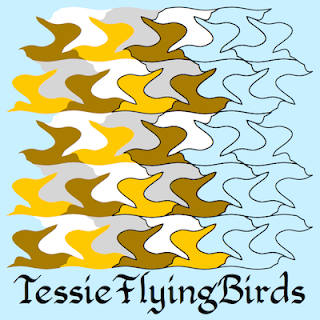 Posted by Dessert Survivor at 2:35 PM No comments: 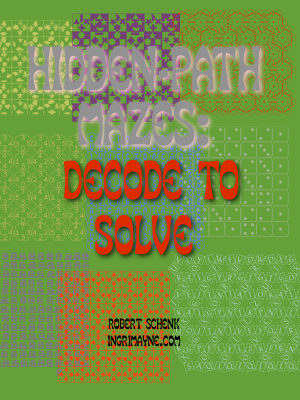