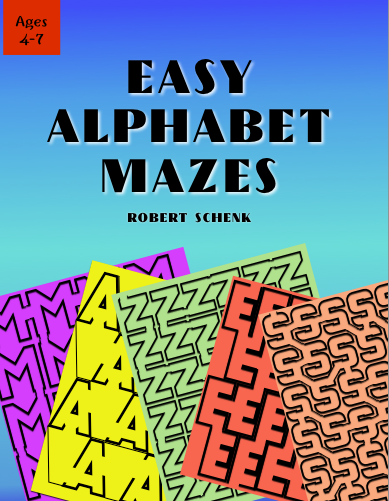 For the past three months I have been having an adventure in designing and publishing three books. (Notice that I did not say writing.) It was the prospect of doing books like these that led to the creation of this blog long ago. The end result is now visible on Amazon.com.

has trivially easy mazes because it is meant for preschool children and Kindergarten tots. It is 108 pages long (as are the other two books) but has no words for 105 of those pages. My granddaughter helped me a great deal by solving the 105 mazes in the book so I could see the thought processes of a very young child. 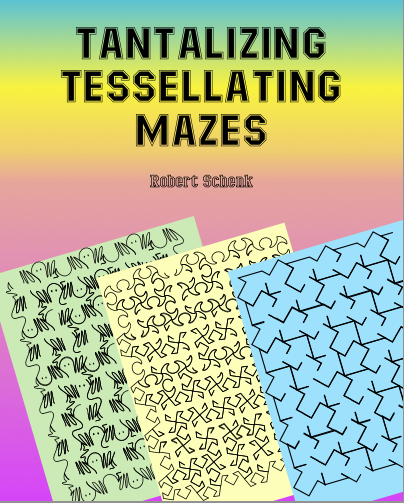 is aimed at kids a bit older, perhaps from second to sixth grades. The mazes are fairly easy, but not trivially easy as in Easy Alphabet Mazes. All 70 mazes are built using tessellation patterns. What, you ask, is a tessellation pattern? It is a shape that fits together exactly to fill the plane. Here is an example of one that is purely geometric:

One of the fun things about tessellation shapes is that some of them resemble or suggest people, animals, or other items that we see or use. For example, what does this tessellation pattern suggest?

Here is one more tessellation pattern, one that was not used in Tantalizing Tessellating Mazes. Rather it was used in the third of the books, Amusing Alphabet Mazes

Amusing Alphabet Mazes has the most difficult puzzles of the three and is aimed at an audience of older children and adults. It has 80 mazes. 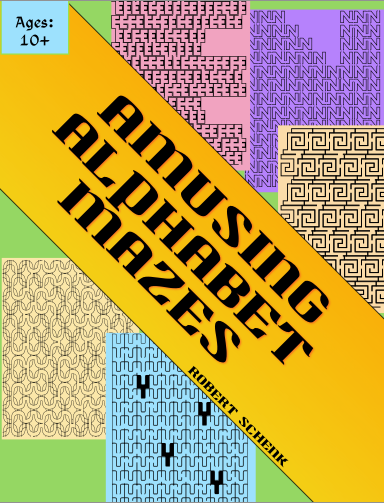 Elsewhere I have some web pages to support these three books, and there you can read about how I make mazes, the series of occurrences that led me to making mazes, my recollections of working with Dover Publishing on two maze books over 15 years ago, and why I think what Create Space is doing has the potential to revolutionize book publishing.

In addition to being available for Amazon, these books are also available directly from Create Space, (which is a division of Amazon): Easy Alphabet Mazes, Tantalizing Tessellating Mazes, and Amusing Alphabet Mazes. The cost of each is $6.95 plus shipping at either Amazon or Create Space, but if you order from Create Space and use discount code QW8A7UDR the price will be reduced by $3.00 (on each book, or each book will be only $3.95). This code only works on Create Space, not on Amazon, and to order on Create Space you must create an account just as you must create an account on Amazon. For some people Amazon will be a better choice because the books qualify for their four-for-three program, where if you buy four qualifying items, you get the cheapest free, and also their program that gives you free shipping on orders over $25.00.

PS: The way that items appear on Amazon is odd. The listing does not appear all at once, fully formed. Rather it appears piece by piece. Each day it may add a bit. If these listing ever get the "Look-Inside" feature, I will know that they are complete.

PPS: If any of you get any of the books, I would really like to hear your reactions, good or bad. Leave them in the comments.
Posted by Dessert Survivor at 5:28 PM No comments: