A Cornucopia of Mazes: Stars, Tilings and Patterns

was published earlier this month. 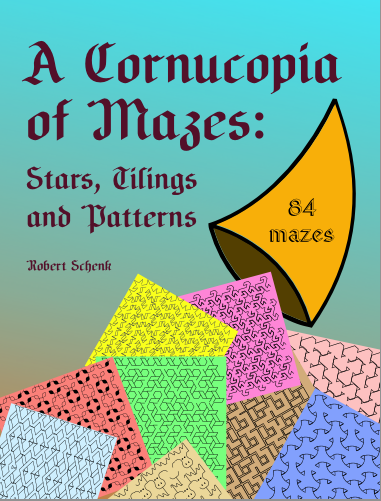 
In January and February of 2012 I designed Tantalizing Tessellating Mazes

, a book with 70 mazes. Intended to appeal to children in elementary school, the mazes had to be fairly simple. As I worked on the book, I kept thinking that a similar book, focused on interesting geometric shapes and patterns but designed for an adult audience, would be a fun project. A Cornucopia of Mazes: Stars, Tilings and Patterns is that book, though there is little overlap with the designs used in Tantalizing Tessellating Mazes.

A Cornucopia of Mazes: Stars, Tilings and Patterns has 84 mazes in three sections. The first section features two dozen mazes based on star patterns. Only one of them uses the familiar five-pointed star or pentagram. Stars with three, four, six, and eight points are easier to fit into simple and regular patterns and thus make better building blocks for mazes.

It is available from Amazon for $6.95.
Posted by Dessert Survivor at 7:14 PM No comments: