A slightly revised edition of Exploring Tessellations is now available. The revision corrects a number of mistakes and adds some new tessellations. In order to make room for the new illustrations, I removed some that were in earlier versions of the book.

Some of the removals were geometric patterns that I had used for mazes. Although they have made good mazes, they showed nothing special as far as tessellations are concerned. These first two illustrated isohedral class IH71, a special case of C4C4C4C4 with all edges the same and symmetry over one of the diagonals. I have no shortage of other examples. 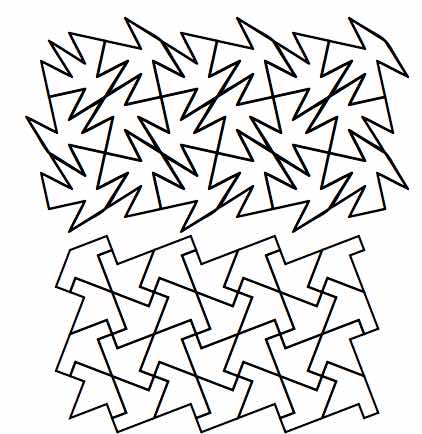 This next figure was used to illustrate CC4C4C4C4. It actually is more than that. It is a bisection of isohedral class IH73 and that is where I should have included it, as an example of IH29. However, I had other examples that were at least as interesting. This geometric design of TG1G2TG2G1 made very good mazes but it is geometric rather than representational. 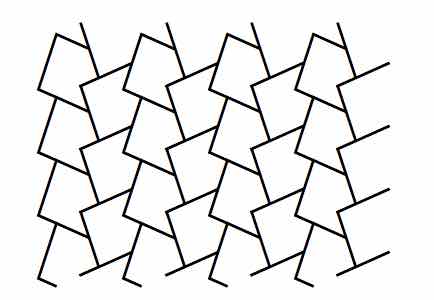 I used this TCCTCC tiling to illustrate the type because I had few examples in the first draft. Since then I have found more interesting examples to replace it. 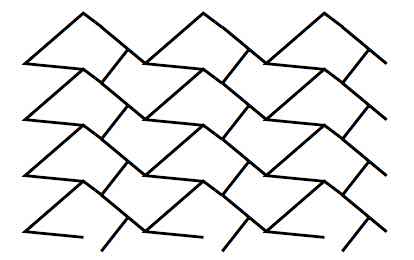 The head and wings of this stylized bird are OK, but the tail end is all wrong. With the addition of some better illustrations, it was expendable. 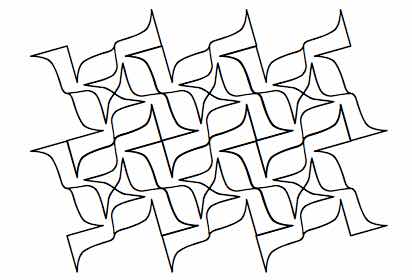 These crude cups of type TTTTTT were used in a maze book. They are not very interesting or attractive. 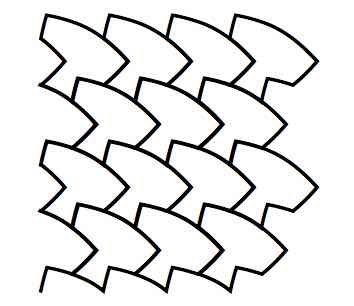 These birds were a second way to illustrated Heesch type CG1CG2G1G2, this one with one of the C edges on the beak of the bird. I found a better way to draw the bird so dropped this one. Another illustration of Heesch type CG1CG2G1G2 is the next tiling of fish or dolphins. This was my version of a much better dolphin tessellation by Andrew Crompton. If I had discovered it independently I would have kept it, but I did not. 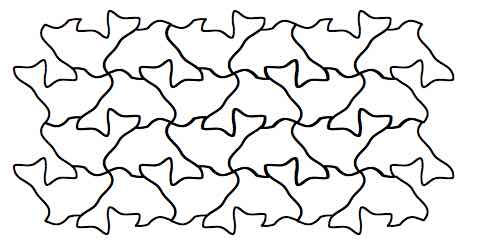 Will there be more revisions? Probably. I am confident that many errors remain. If I find enough of them to justify a revision, I will update.

(Looking for a link to IH29, I found that a site that I have relied on as a reference, http://freespace.virgin.net/tom.mclean/index.html, is no longer responding. There is a mirror, however, at http://www.jaapsch.net/tilings/mclean/index.html.)
Posted by Dessert Survivor at 3:07 PM No comments: Links to this post