Tessellating Alphabet Mazes for Kids is now available on Amazon 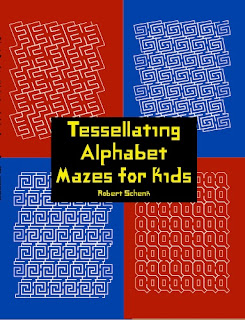 This way of forming the upper-case D was elementary but had not previously been used.

This new letter G shape is a bit odd but it forms a very nice pattern for a maze.

The three pictures above are of actual pages from the book. The way the mazes are displayed on top of a grayed image of the letter is the same as that used in the Puzzling Typography books. Arrows indicating the exits are included.

The shapes used in Tessellating Alphabet Mazes for Kids were of the upper-case letters. There are no solutions included, so the book contains over 100 pages of mazes, enough to keep a child busy for a long time even though the mazes are not very difficult. Letters that a hard to tessellate, such as K, R, O, and Q, only get one page, while letters that are easier to tessellate get more pages. The letter L is by far the easiest to tessellate in many ways, so it gets more pages than any other letter.

The book is intended to appeal to children in the early primary grades.
Posted by Dessert Survivor at 8:34 AM No comments:

A set of typefaces based on the various letter tessellations used in the Puzzling Typography maze books is now available at Myfonts.com. The complete set contains seven fonts.

Tescellations contains the letter tessellations that best fit together to make a readable font. It contains a regular version plus an italics version. In addition there are regular and italic versions of the font without the counters (interiors). 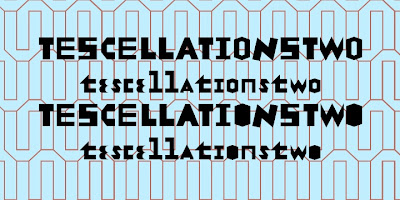 Finally, TescellationsPatterns is a one-key way of making patterns of letter tessellations. Simply chose the appropriate key and type, making sure the line spacing (leading) is set tot he same value as the font size. 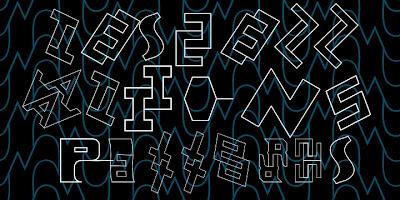 Posted by Dessert Survivor at 9:15 AM No comments:

I could not resist doing a sequel to Puzzling Typography: Mazes with Letter Tessellations. It was not because Puzzling Typography was selling so well. It was not--mazes are a niche market, and I doubt if any maze books sell very well. Rather it was because I had become obsessed with letter tessellations and I kept discovering new ones, either new shapes or new ways of arranging old shapes. I was a little worried that I might not be able to do a book with the same quality as the original, but as time went on, that worry disappeared.

It took a month and and a half, but now Puzzling Typography A Sequel: Mazes with Tessellating Letters is available on Amazon

The book has the same format as the original. There are 84 pages of mazes and 21 pages showing the solutions. Each letter of the alphabet is represented at least once. More of the pages in the sequel are given to lower-case letters than were devoted to lower-case letters in the the original. Many of the shapes are the same as in the original, but the way they fit together is different, but there are also some new shapes. The R-shape is one case where the shape in the sequel is better than in the original. I was prepared to use a rather strange-looking Z until at the last minute I discovered a way to do a much better Z, one equal to the best in the first book.

The letter L is the letter for which I found the most tessellation patterns, with 21 pages in the two books devoted to them, plus one back cover. After finding many ways to tessellate the letter T in the first book, I struggled to find new ways in the second, but the letter F proved to be more productive than I expected.


Posted by Dessert Survivor at 7:52 PM No comments:

For several months I have been exploring letter tessellations in the an effort to design maze books. The first result was Puzzling Typography: Mazes with Letter Tessellations.

Now a second result, a byproduct of the maze books, is also available on Amazon, The Tessellating Alphabet Coloring Book. 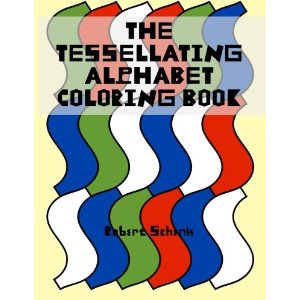 The Tessellating Alphabet Coloring Book features many of the letter tessellations that were used in Puzzling Typography but also includes many new shapes and patterns, such a the S shape above and the pattern below for the letter R, one of the most difficult letters to tessellate. 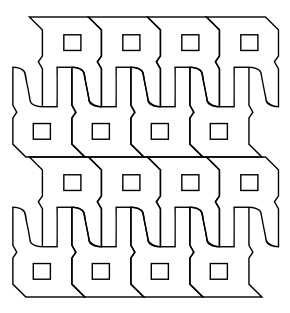 The Tessellating Alphabet Coloring Book is 105 pages long and has at least one page devoted to each letter. For some letters there are many pages. (More means more than six.) Letters F and L are especially well represented.

There are other projects in the pipeline and two of them are almost completed. Stay tuned.
Posted by Dessert Survivor at 5:39 AM No comments: