Early this year I published two books of mazes that used letters as their themes, Easy Alphabet Mazes and Amusing Alphabet Mazes. In the process of designing mazes for the latter book, I used some tessellation patterns in which a letter form could interlock in a way to fill the plane. In the months following I spent a lot of time working on non-letter tessellation patterns, and the questions gradually arose of whether I could do a complete book of mazes using letter tessellations. It took a while for me to answer that question in the form of Puzzling Typography: Mazes with Letter Tessellations

The lettering on the cover is composed of letter shapes that tessellate and they are all used in mazes within the book.

The easiest letter to tessellate is probably the sans-serif letter I, which seemed so simple that I did not include it in this book. The letter that has the most possibilities is probably the letter L. There are ten pages devoted to various ways of tessellating this letter and there are many more ways that I did not use, though eventually they become so complex that they will not fit well with the way I create mazes.

The picture above shows how all pages are formatted. Behind the maze is the gray letter form on which the maze is constructed. The maze is on top of it. There are arrows marking the beginning and end of the correct path and a bit of text on the bottom. The mazes are difficult enough so that they will only frustrate small children; the recommended ages are 12 to adult (and the mazes may frustrate some in that age range as well). 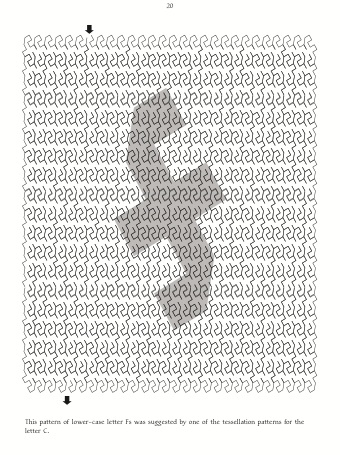 There are 84 mazes in the book with 86 different patterns. Solutions are shown in the back of the book. The book has 108 pages and uses 8 inch by 11.5 inch pages.

When I started I was unsure if the book was even possible, but by the time I was finished I had found so many different ways of tessellating letters that I now am wondering if a sequel would be a fun adventure.

Update: I made some changes to the book and the letter f tessellation was removed from the book, though it will soon appear in an new book. It had a worthy replacement.
Posted by Dessert Survivor at 7:29 AM No comments: