From Easiest to Hardest Updated

In November of 2012 I ranked my maze books in terms of their difficulty. Since then I have finished three more maze books. Below is what the ranking looks like with the new books included.

Solutions are provided for Tantalizing Tessellating Mazes and those listed as more difficult.

The two books published by Dover (Fascinating Mazes and Maze Madness) are much shorter than any of these and are about at the level of Amusing Alphabet Mazes.
Posted by Dessert Survivor at 2:57 PM No comments:

After I published them, I kept thinking of new ways to improve them. In addition to small changes in text and small alterations to placements of items on the page, I found three new maze designs for the Princess book and two new maze designs for the Pirate book. Adding new mazes meant that weaker mazes could be removed. I intended to wait a while before updating, but the discovery of two serious errors in the Pirate book changed that. I decided to update both at once.

It is embarrassing to admit that I released the books too quickly, but they are now better books. Hopefully any additional update will be in the distant future.
Posted by Dessert Survivor at 10:03 AM No comments:

Once I started sketching the book, I realized that the book would be much easier to do and a much better product if I opened it to a wider selection of mazes. In the end only about one third of the maze designs used in the Princess book remained in the Pirate book.

To give the book a more "piratey" flavor, I designed several special pirate maze typefaces. The book has two anchor-themed mazes: 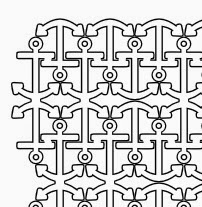 as well as two mazes that have a helms-wheel motif. 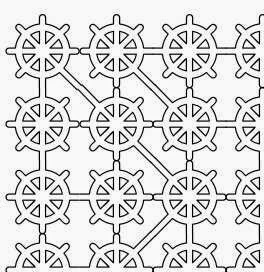 The skull and crossbones motif appears in at least five mazes scattered throughout the book. Each is a bit different not only in appearance but in the way the pieces connect. The one shown below connects horizontally, vertically, and diagonally. 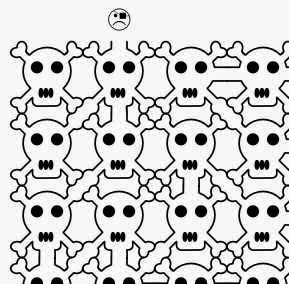 Plus there are a couple of other new maze designs, such as this one that appears on the back cover. 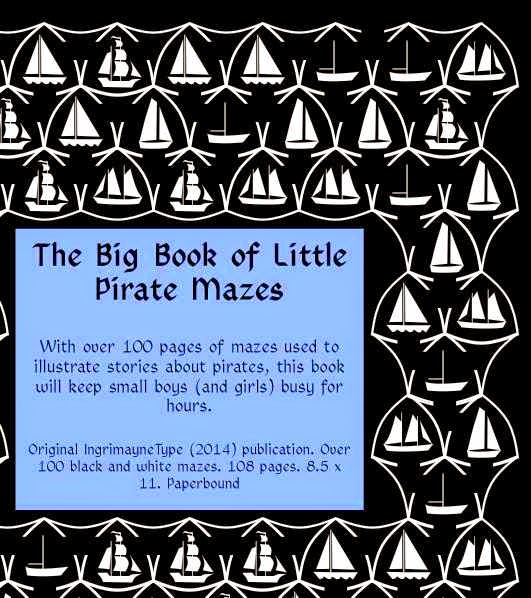 The book is designed to appeal to boys approximately four to eight years old. Children vary a lot in their interest in and ability to solve mazes, so it is hard to pin down an exact age. The book not only has a theme of pirates, but it has a narrative that flows through the book that includes pirate stories as seen through the eyes of small boys.

Below is the cover. You should be able to see a skull-and-crossbones design. 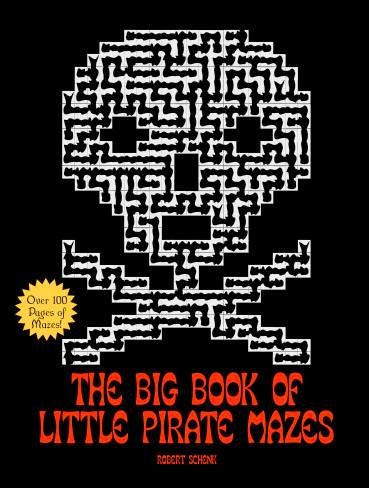 Although this book was started when The Big Book of Little Princess Mazes was largely completed, it was finished at the same time. It is available from Create Space and Amazon

The blurb for for the book reads:


The Big Book of Little Pirate Mazes is a maze storybook in which a story line is illustrated with mazes. It is a big book, with over 100 pages of mazes, many of which use a tessellation pattern as the foundation of the maze. The story line has unexpected twists and turns as well as some dead ends, and it pays homage to several literature classics. No solutions are provided. Some of the mazes are very easy, but even those that are a bit more difficult can be solved by any child with patience and trial and error. The Big Book of Little Pirate Mazes will provide hours of entertainment for young boys and girls who like pirates and stories of sea voyages.


For the book's introduction, see here.
Posted by Dessert Survivor at 2:21 PM No comments:

After finishing Hidden-Path Mazes in February of 2013, I intended to stop designing maze books and to move on to other things. As I told my daughter-in-law in early 2014, none of the ten maze books I had designed from 2011 to 2013 had sold well. Then I mentioned that of those low-selling books, the one with a train theme and story, Casey Loves Trains (And Like Mazes), had sold the best. She commented that a book of princess mazes would sell better than a maze book with a train story. I was intrigued.

When my daughter had suggested I do the book of train mazes, I was initially resistant--I did not  think I could do such a book. Trains are one-dimensional and mazes are two dimensional. Having figured out a way to do a book of train mazes, I was confident that I could do a book of princess mazes. Furthermore, it seemed to be an entertaining challenge. After finishing some other projects, I started to seriously work on the the book in May. The inspiration for a narrative came from two granddaughters, one of whom proudly announced that she was a picky eater and another who asked her mother if she could have a unicorn. Two months and a few hundred hours later, The Big Book of Little Princess Mazes iss complete and ready for sale on Create Space and Amazon The blurb on Amazon


The Big Book of Little Princess Mazes is big, with over 100 pages of mazes that will entertain and delight little girls for hours. The mazes provide illustrations for four stories of little girls who want to be princesses. Natalie searches for fairies, Maria discovers how to act like a princess, Claire tells a silly story of a mermaid princess, and Emma asks her mother if she can have a unicorn. The mazes are visually attractive, with many making use of tessellation patterns. They are simple enough so that no solutions are provided; any child should be able to work them with a bit of patience and trial and error.

The Introduction to the book is here.

In most of my previous maze books, much of my effort was focused on discovering tessellations or finding clever ways to hide a maze. The focus was not on what the reader would like but on some challenge of designing the book. For this book I designed no new maze typefaces. Rather I used the library of maze designs I had created for my previous dozen maze books, a library that contains somewhere between five hundred and a thousand designs, Because I was not designing new ways of displaying mazes, I was able focus on developing a story narrative and considering what would entertain children who might buy the book. I hope that those who buy the book will enjoy it.
Posted by Dessert Survivor at 6:22 PM No comments: