Anisohedral tiles and the 3G method

When I started working on Exploring Tessellations: A Journey Through Heesch Types and Beyond, I realized that tessellations could be classified by Heesch type and I understood that there were some that did not fit that classification, but knew almost nothing about those that did not fit the Heesch classification. As I sorted patterns and searched the Internet for more information, I discovered the isohedral classification of Grunbaum and Shepard.  It was not until I began to sort letter tessellations done for several maze books that I found I needed to learn what lay beyond isohedral tilings.

Below are two two tilings of the letter F, one on the right and one on the left. (They differ in how the backs of the letter F are positioned.) They do not fit into the Heesch types and they do not fit into the isohedral classification. The problem is that the tiles do not fit their neighbors in the same way throughout the pattern. Consider the top of the F. In some cases it is fit between the top of a neighbor and the middle bar, and in other cases it fits above the top of a neighboring F. The requirement for an isohedral tiling is that a tile fit its neighbors in the same way throughout the pattern. (There is a mathematical way to express this that is undoubtedly more precise but those without a mathematical background struggle to understand it.) Mathematicians call this type of tiling anisohedral. 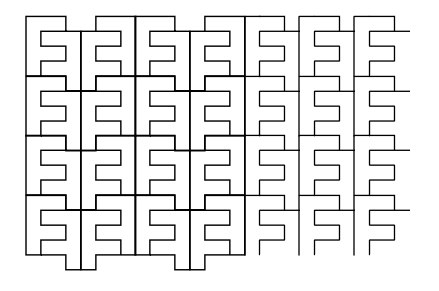 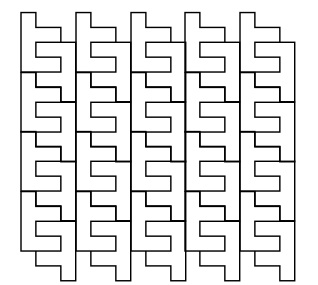 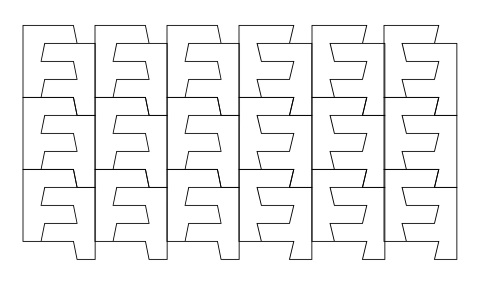 When I was doing letter tilings, I had no interest in this shape because it is an inferior way of representing the letter F compared to the shape in the first figure.

If we analyze this shape and a large variety of similar shapes that are anisohedral tiles, we find that the key side is made from three glide moves. In the pattern above, we start with the bent line that makes up most of the very top of the letter F. We copy this line, flip it, and move it downward (1). After connecting it to the original line, we copy it,  flip it, and move it downward again (2). Again we connect this line that has been flipped twice (so it has the original orientation), then copy it, flip it and move it for one last time (3). When we connect this last line to the rest of the figure, we have formed the front part of the letter F (4).  We have a shape that has been formed with three glides and this method is the key element in a great number of the almost 150 anisohedral examples shown on the site mentioned above, displayed here. (Note that in a true glide the segments would be moved downward until they connected. In the picture below they are move out of position to make the segments more visible.)

I used puzzle pieces to illustrate various things in Exploring Tessellations. Below is a puzzle-piece example of the 3G method. Ignore the top and bottom edges. The sides have two edges. One of those edges has one side of a puzzle piece and the other edge has three identical sides flipped. The tile is anisohedral. 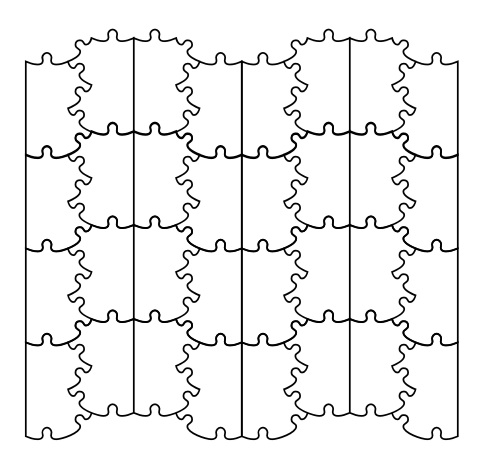 The angelfire site has instructions on making anisohedral tiles that involve combining two tiles and cutting them. There are several ways to to this. I noticed that in an example I used to illustrate isohedral class IH12 there were four sides lined up with three glides. Combining two of the tiles and splitting them results in an anisohedral tile and tiling. 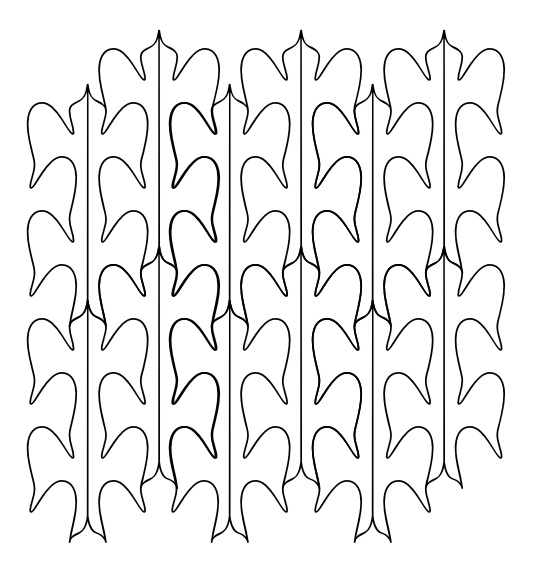 Unlike isohedral tiles that can be sorted into a limited number of types or classes, there is no catalog of classes for isohedral tiles. There may be an infinite number possible. Instead of classifying the patterns, mathematicians classify them by the number of roles the tile plays and the number of neighbors it has in each role. (A tiling in which the tile plays one role is isohedral.) In addition, the number of alike and unalike neighbors is counted. In the F example above that has anisohedral tiles, each tile has six neighbors. Two of the neighbors are alike and four unalike. The way this tile would be classified is 6464. In the puzzle example each tile has five neighbors. For each kind, three are alike and two are unalike, so the classification is 5252 as is the last one of the doubled birds.

Right now anisohedral tiles and tilings are of interest only to a very few mathematicians. As far as I know, no one has created an Escher-like tiling with them and until someone finds a way to use some of them to make something other than abstract, geometric shapes, there will be little interest in them.

I have some other ways to create anisohedral tiles that may be the subject of a future post.
Posted by Dessert Survivor at 3:30 PM No comments: Links to this post

I have released a few coloring books as offshoots of the maze books I have designed, and this fall these offshoots are selling better than the maze books by a considerable margin. (For me a book that sells five copies in a month is a spectacular hit. Only rarely does one of my books crack the top 100,000 list on Amazon.) So when I finished up the FabFours typefaces, I decided to add another book to my coloring book offerings. It is titled Delightful Designs: A Coloring Book of Magical Patterns. Below is the cover. 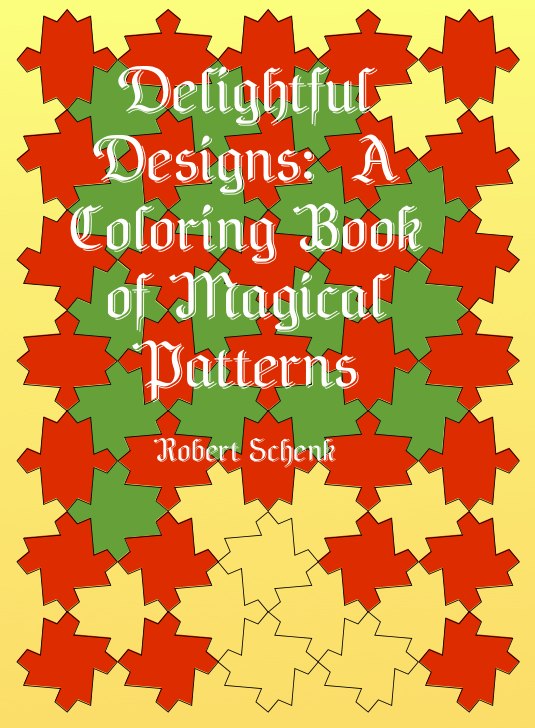 Here are examples of what is inside. I have kept the lines thin to aid coloring. 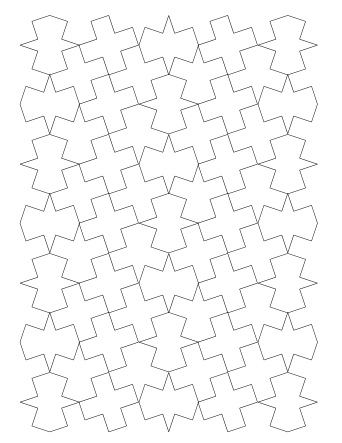 Each of the designs in made from a family of four tiles that share the same identically shaped edge. 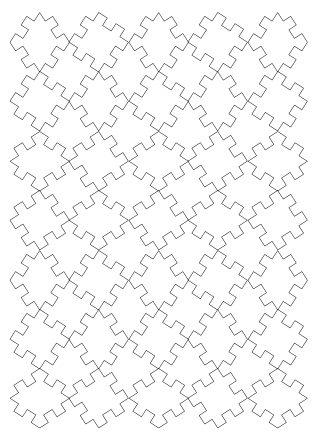 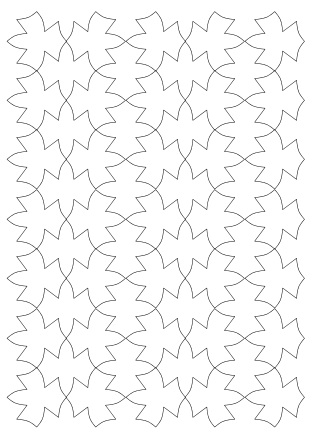 The book features a result I discovered while studying tessellations. There are sets of four shapes that can be tiled in a checkerboard-like pattern of tiles and voids, and the voids must take the same four shapes that the set of tiles has. The result is two-, three- and four-tile tessellations, that is, patterns that tessellate with two shapes, or three shapes, or four shapes. The tiling above, for example, has two distinct shapes in it, while the first two have three distinct shapes in them. When I discovered the patterns that these sets of shapes could make, it seemed magical, and hence the name of the book.

Delightful Designs is available on CreateSpace and Amazon.
Posted by Dessert Survivor at 9:27 PM No comments: Links to this post

The FabFours family of typefaces

While working on Exploring Tessellations: A Journey through Heesch Types And Beyond, I discovered that if a square template is shaped with identical center-point rotation edges, there are exactly four distinct shapes possible. Two of those shapes can be in two orientations, one in four orientations, and the last in eight orientations, for a total of 16 orientations.

If the shapes are connected not edge to edge but vertex to vertex, they form a checkboard-like pattern of tiles and voids. The voids have four edges that are formed by the four adjacent tiles and thus they too must have the same four shapes in 16 orientations that the tiles have. By arranging the tiles in different ways, a huge number of different patterns become possible. I tried to find some place on the web that explored these patterns, but could not. However, it is unclear what the best search terms would be.

I have taken this insight and made a series of eleven typefaces that are now available on MyFonts.com. A person using these typefaces can, by simply typing in letters from A to P or a to p, explore possible patterns that these four shapes can generate. Each typeface has two different designs on it. Below are a couple examples. 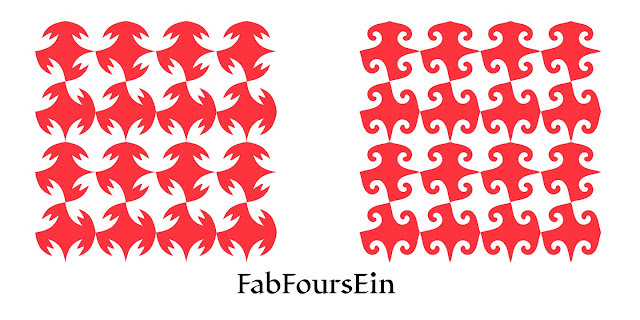 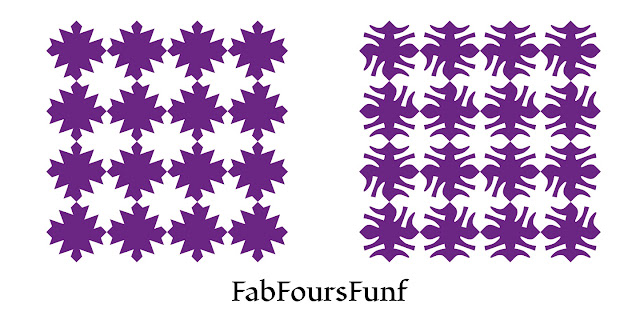 I was able to use these patterns to illustrate 11 of the 17 wallpaper groups of symmetry.

They are available at www.myfonts.com/fonts/ingrimayne/fab-fours/.
Posted by Dessert Survivor at 6:14 AM No comments: Links to this post