If all edges placed on a square template are identical with mirror symmetry over the midpoint, there are two distinct shapes that will tessellate, one with two “outs” that are adjacent and one with two “outs” that are opposite. Note that the shape must have two “out” edges and two “in” edges; if the number of “outs” is not equal to the number of “ins”, the pieces will not tessellate. Below is an illustration of the two possibilities with an edge that forms puzzle pieces.

Suppose that the edge does not have the bump centered in the middle but rather offset to one side. How many distinctly different shapes with these identical asymmetric edges will tile the plane?

I answer this question in a note published in the November 2016 issue (Vol 100 Issue 549, pp 511-516) of the Mathematical Gazette: there are 15 distinctly different shapes and all will tile the plane. Thirteen will tile the plane as Heesch types and two will tile it in a non-isohedral pattern.

The note in the Mathematical Gazette is limited to the square template. Exploring Tessellations: A Journey Through Heesch Types and Beyond extends the analysis. If the template is a rhombus or diamond (a square squashed), there are 30 distinct shapes of which 20 will tile the plane. If the template is a regular hexagon, there are 108 distinct shapes that have three “ins” and three “outs” when identical, asymmetric edges are fitted to the template. Thirty-four tile isohedrally as Heesch types and another nine tile anisohedrally. Sixty-five will not tile.

Exploring Tessellations: A Journey Through Heesch Types and Beyond also considers equilateral templates fitted with edges that have central rotation and some of these results have been mentioned in past posts on this blog. There are two distinct shapes if the template is an equilateral triangle, four for a square, seven for a rhombus, and nine for a regular hexagon. One of the nine for the regular hexagon will not tessellate. Also, all Heesch types except three that will not fit as equilateral polygons (CC3C3, CC4C4, and C3C3C6C6) can be formed with identical edges of central rotation.
Posted by Dessert Survivor at 8:06 AM No comments: Links to this post

A couple posts from October, 2015 (here and here) examined ways of using Tesselmaniac! to construct isohedral class tilings that that did not have a template in Tesselmaniac!. Three hexagonal tilings with opposite straight edges were not included and all three of these can be easily constructed without removing interior lines.

First is isohedral class IH14. It has four edges that are shaped the same. Each edge is glided and reflected, and the result is that all three opposite pairs are translated. It fits two Heesch types, TG1G2TG2G1 and TTTTTT. It also will tile as a non-Heesch (and non-isohedral) type with flips over the straight edges. It has cm symmetry. It can formed in Tesselmaniac! in the IH68 template by positioning a point to create a straight edge. Obviously, if that line is reduced to zero, the tiling will be an IH68 type, a mirrored G1G1G2G2 type. 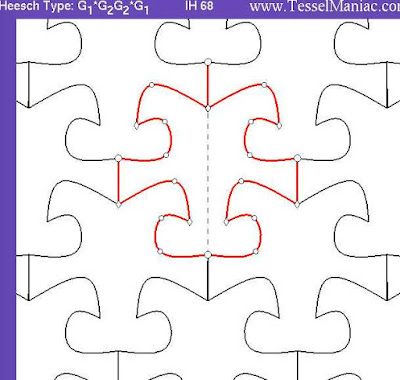 Isohedral class IH15 is another mirrored tiling with two adjacent edges formed identically with center-point rotation and mirrored and the other two adjacent edges on the other side of the two straight edges also formed identically and mirrored. It satisfies the condition Heesch type TCCTCC with the straight edges serving as the translated pair. Because mirroring an edge formed with central rotation is the same as flipping it, IH15 also satisfies types TG1G1TG2G2, and TCCTGG. Finally, because the tiles can be flipped over their straight edges, it also tiles as a non-Heesch (and non isohedral) type. IH15 has pmg symmetry.

In Tesselmaniac! IH15 can be constructed with the mirrored C*CC*C or IH69 template by positioning a point to create a straight edge. 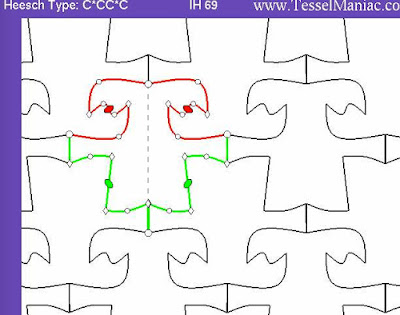 Isohedral class IH17 is a special case of both IH14 and IH15 (as well as IH8, IH9, IH12, and IH13). Two opposite edges are unshaped, straight lines. The other four edges are all shaped with identical center-point rotation and each is reflected (which is the same as gliding) both vertically and horizontally. In addition to tiling in a non-Heesch manner with flips over the straight edges, it satisfies the conditions of six of the seven hexagonal Heesch types, everything but the C3C3C3C3C3C3 type. It has cmm symmetry. Notice the the shape of the tile is restored when it is rotated 180 degrees, when it is flipped over its horizontal midpoint, and when it is flipped over its vertical midpoint.

In Tesselmaniac! IH17 can be constructed with the mirrored C*C*C*C *or IH74 template by positioning a point to create a straight edge. 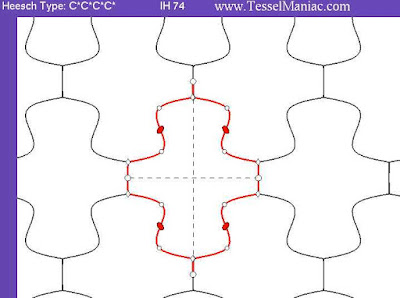