Print on demand makes updating an existing book very easy. There are both good and bad aspects of this feature. Easy updating allows one to correct mistakes in a published work without calling back an inventory of unsold books, but it also encourages publication before the work is completely finished.

I recently updated Exploring Tessellations: A Journey through Heesch Types And Beyond again and this time the changes were substantial. The book is now organized into five chapters: Symmetry, The 28 Heesch Types, The Isohedral Classes, Explorations, and Themed Examples. The Explorations chapter has most of the material that I have developed since the book was published about three months ago. (I plead guilty to rushing to publish.) In the original version I attempted to see how many Heesch types would allow a puzzle piece with identical sides and 90 degree angles. I found 13 distinct shapes that fit the quadrilateral Heesch types that lack an edge of center-point rotation. For some reason I decided to follow up with the question of how many distinct shapes with identically shaped asymmetric edges could be formed with a square template. I was surprised to find 15 and discovered two shapes that did not fit Heesch types. They were anisohedral.

It was an easy extension to ask how many distinct shapes could be formed if the edge was not asymmetric but had center-point rotation. Only four distinct shapes are possible and all tessellate. Playing with these results, I found that by placing the shapes vertex to vertex rather than edge to edge, a pattern of tiles and voids results in which the voids necessarily have the same set of shapes as the tiles. This result was presented on this blog in two posts, here and here. There are only two distinct shapes when the exercise is done with triangles and seven when done with rhombuses, results that were the topic of the previous post on this blog.

When the template of a regular hexagon is shaped with identical sides with center-point rotation, there are nine distinct shapes possible, but one of them does not tessellate. There is only one way to arrange them vertex to vertex so that all vertexes meet another vertex, and the voids then form shapes based on the triangular template. Although there are a huge number of possible arrangements, the results are not as visually interesting as those with the square template. (In the figure you below you can see examples of the nine distinct shapes. The one on the bottom left, which has the most symmetry, is the one that will not tessellate.) 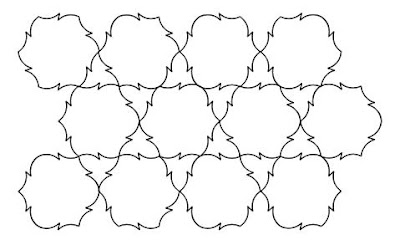 Out of curiosity I decided to see what was possible with a template of an equilateral chevron when it was tiled with six adjacent tiles. (Some odd tilings are possible with the chevron, one of which spirals out to infinity.)  I found that there were sixteen distinct shapes that tessellated (and sixteen distinct shapes that do not tessellate). All 16 tessellated as TCCTCC types, four as TG1G1TG2G2, and 12 as TCCTGG with four of them tessellating in two distinct ways. This particular exploration seems to be a dead end; I cannot see any extension that looks interesting. (In the tiling below the first four rows are tiled TCCTCC and the last four TG1G1TG2G2. Notice that the edge used is identical to the edge used in the previous figure.) 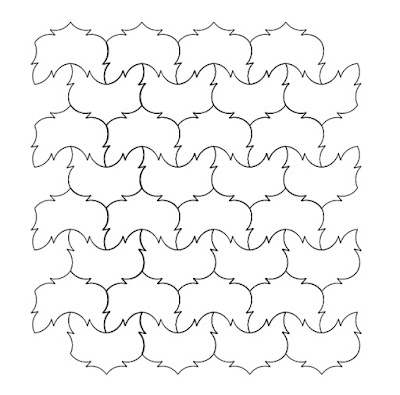 The latest update of Exploring Tessellations is about twenty pages longer than the previous version. I will not be surprised if there are more revisions in the future, though I am not currently working on anything that would lead to an update. I know that errors remain in the text but I do not know if I can find them.
Posted by Dessert Survivor at 7:51 PM No comments: Links to this post