After updating tessellating maze books in May, I updated some other books. While doing that I discovered patterns that made simple mazes quite difficult to solve. I could not resist the temptation to include some and so did a second round of revisions and updating. Below is a sample, though not an actual maze from either book. All the paths go through the corner swirls. 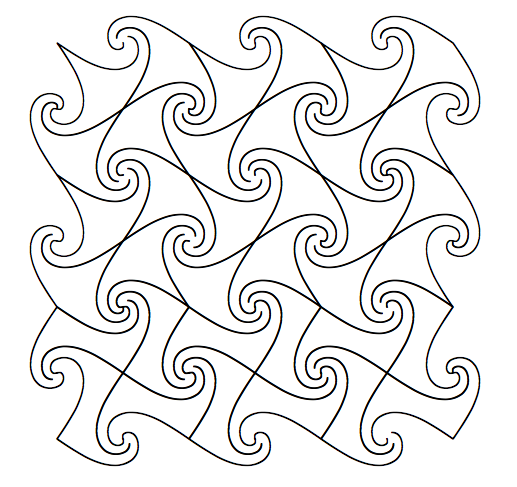 The updating resulted in the elimination of a number of common geometric tessellations that, while they made decent mazes, were not of much interest to those looking for visually-interesting tessellation. Tantalizing Tessellating Mazes had four additional pages changed and More Tessellating Mazes had 12 additional pages changed. As a result of the two 2018 revisions, both books have 39 new mazes and 45 holdover mazes.

In the maze above there are two shapes that tessellate. The top one is an example of isohedral class IH71. All edges are shaped the same and there is mirroring over a diagonal line. The bottom shape is an example of class IH61. The tile has two-fold rotational symmetry and uses the same edge as the top shape. 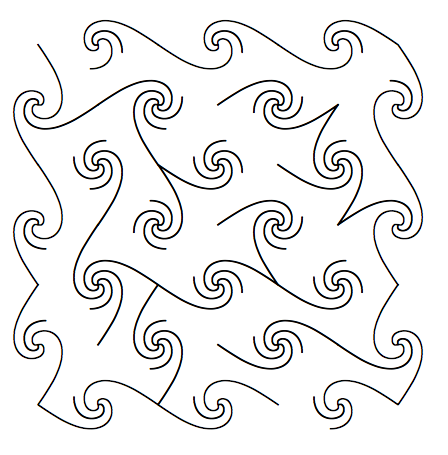 Posted by Dessert Survivor at 5:20 AM No comments: Links to this post

The three books contain over 300 tessellation designs and each is unique to one book. The first two of the books listed above were designed before the adult-coloring-book fad hit and were meant for children. The last book was intended for adults but it lacks the fussiness that many of the adult colorers seem to desire.

They all still have some weak designs and some geometric tilings that are in the public domain so if in the future I find additional interesting tessellating shapes, there may be more revisions.
Posted by Dessert Survivor at 5:30 AM No comments: Links to this post

Exploring Tessellations: A Journey through Heesch Types And Beyond was published in October, 2015 and then for the next year was repeatedly updated as mistakes were corrected, new material added, and sections reorganized. The last of those updates was at the end of 2016. Since that last update I have designed an activity book and another maze book as well as updating two earlier maze books. The work on these books provided enough new material to justify going back and reviewing the content and organization of Exploring Tessellations.

This revision of June 2018 adds many new tilings as examples and deletes some old tilings that were substandard. It also reorganizes the section on Heesch types. The original organization of that section was based on efforts to find standing birds that tessellated. That whimsical organization was replaced with a more standard organization that stresses Heesch families. Heesch and his co-author showed that their list of 28 types consisted of nine main types from which the other 19 types could be derived by shrinking edges to zero. For example, type TTTT results when one of the TT pairs in type TTTTTT shrinks away.

These chess pieces were added as an example of isohedral class IH69. The tile has symmetry over a diagonal. It simultaneously fits Heesch types CCCC, G1G1G2G2, and CCGG. In this example two edges are straight, but that is not a requirement of class IH69. 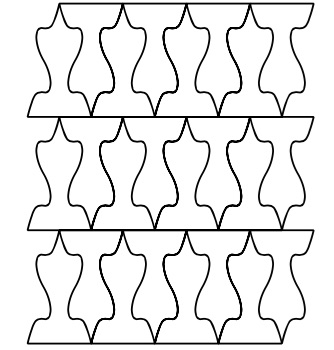 This next image has been in the book from the start as an illustration of isohedral class IH91. It also has reflective symmetry. It is based on an isosceles triangle and one edge must be straight for it to have that symmetry. It fits both Heesch type CCC and CGG. 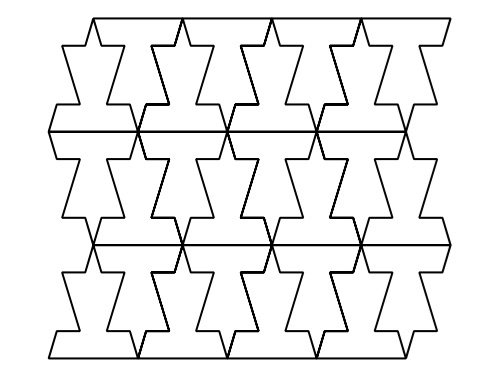 Finally, below is a new example of Heesch type CC3C3 (IH39), which is the hardest of the Heesch type to form into Escher-like tessellations. It could be a leaf on a twig or a rosebud. 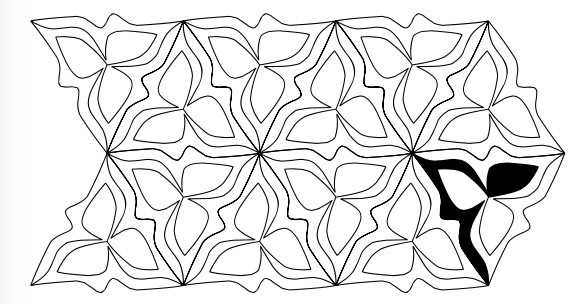 The book has hundreds of other illustrations and is one of the few sources that explain both the Heesch classification and the isohedral classification of Grünbaum and Shepard.
Posted by Dessert Survivor at 6:52 AM No comments: Links to this post